We endeavour to use only the freshest, local ingredients.  We believe by shopping local, we are supporting local business and increasing sustainability for all of us and future generations. 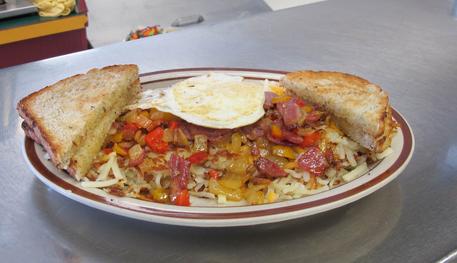 ​Terry's Comfort Food With Attitude started as Over Easy, back in 2009.  The name had to be changed because of Trade-Mark infringement.  This allowed Terry to carve out some individual identity from the masses.  Terry enjoys working in the kitchen with his amazing staff, most of whom have been with Terry's since it's inception.

Most of you know Terry's story, but for those who do not, Terry is an avid cyclist, skiier, dirt bike rider and general outdoor enthusiast.  Terry also enjoys 'trying to learn photography', gardening and hiking with his two dogs, Mistral & Mack.

Terry is the amazingly lucky recipient of a new kidney from his incredible friend, Kellie (a Portland, Oregon native, now living in Penticton).  Terry and his wife, Nancy love to chat about organ transplant and how we can all register as organ donors here in Canada!

Terry, Nancy and Terry's Comfort Food With Attitude support and volunteer with various charities, including The Kidney Foundation of BC, World Vision, BC SPCA, Critteraid and many others through our donations and gift certificate support program throughout the year.